Creating a 3D Fault Model is always complicated and subject to interpretation. In many circumstances faults cannot directly be recorded and are inferred. In addition, faults are generally not nicely behaved surfaces that simply divide a model area into two. In the past that was how faults were treated in GEOREKA. However, with some newly added tools we have been able to provide a more flexible, yet still simpler way to create faulted geology making the modelling experience more fun and efficient. This allows users to define faults to terminate against other faults, cross-cutting faults or normal fault behavior that is generally associated with a 3D faulted geology model. 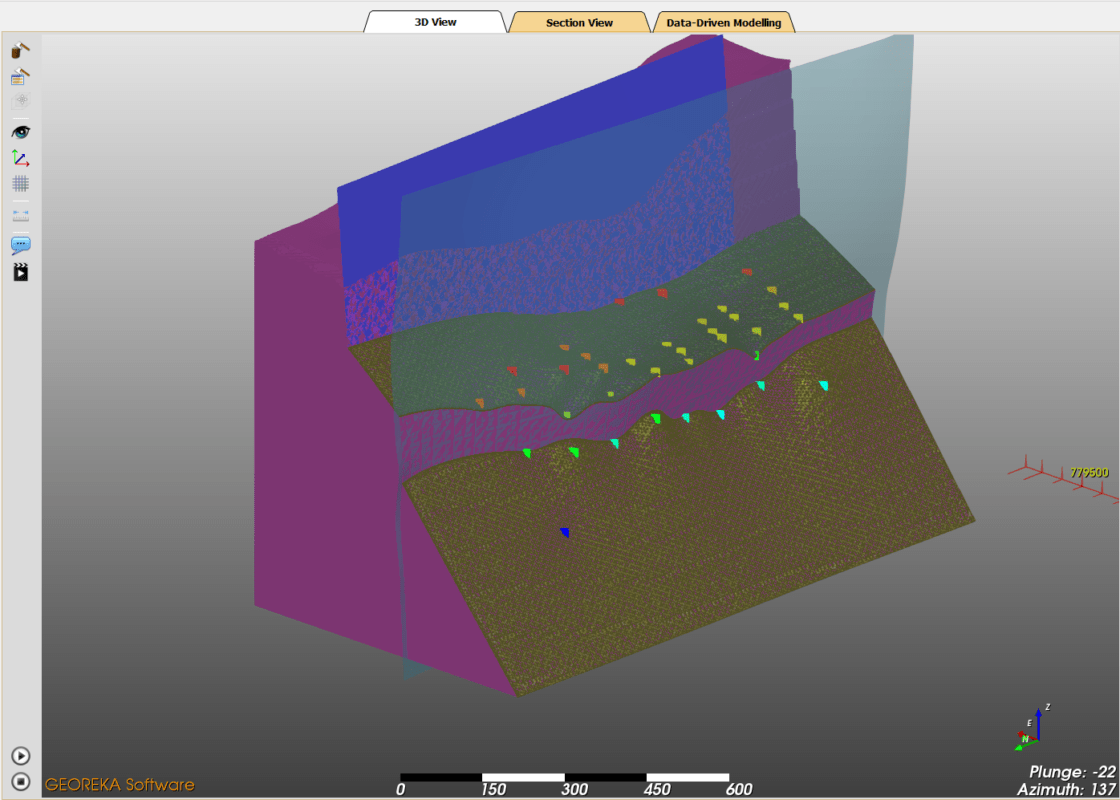 The Geological Model Builder is a recently added tool (from Version 3.1). It gives the user the ability to build a full geological model in a single step from a number of input surfaces (contacts) in case of a simple stratified deposit. However, it is not the only use. Adding the ability to create fault blocks as a first step greatly improves flexibility and efficiency for more complex models. In this article we demonstrate how this new tool can be combined with a few other improvements to quickly build complex models.

The most important aspect in modelling fault blocks is by defining the relationships between faults. When they are near-parallel the step is fairly simple. But what happens when faults cross-cut or terminate against another? Here we give some artificial examples on how that works in GEOREKA.

First we want to model a fault terminating against another. This is relatively simple. Connect both fault surfaces and assign labels to either side of the fault surfaces. 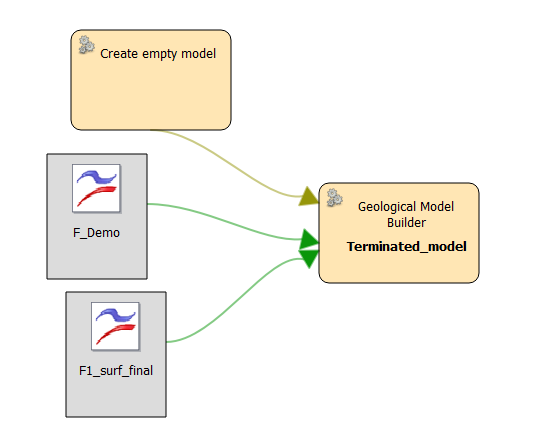 The software uses the “Unknown” label for parts that still need to be defined. The modelling process cuts the empty model into 2 parts where we leave one side as “Unknown” and label the other side “West”. The second surface then labels all these remaining “Unknown” parts as “Central” and “Center_2” respectively. The result is a terminated fault block model: If we would then like to model the parts as cross-cutting, we need to add an extra step. That is due to the limitation that only “Unknown” can be labelled by default. This prevents the tool from overwriting a block that is already labelled. However, in this case that is exactly what we need to do. We need to overwrite the “West” block and divide it into 2: 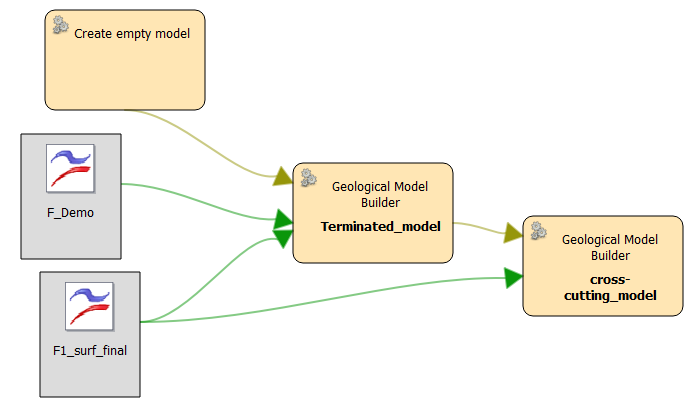 Note how we set the Category to be replaced by “West”. All parts labelled “West” will therefore be renamed using the connected surface(s). So, here the labels on either side of F1_surf_final are no longer “Central” and “Center_2” as we had in our previous step (see above). Here we actually use different labels! After running this complete workflow we have nice cross-cutting fault blocks: 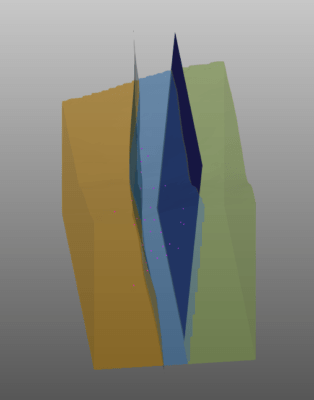 The above examples only show how fault blocks can be modelled. In the next example a fault block model is create from real data and used for the geological model.

In this example the faults are running near-parallel dividing the model space up into 3 zones:

How can we make use of this knowledge? This will come apparent with another tool introduced in GEOREKA Version 3.1: Planar surface inside zones.

Normally when extracting contact points and creating a surface the result would be a single continuous contact across the whole model area. If you have such a contact GEOREKA has tools to select points inside a domain and constrain the contact to the domain if needed. However, that becomes quite cumbersome when needing to model each section of a contact in each fault block. Therefore, we introduced the concept of creating a faulted contact. This step selects points inside a fault block and constructs a partial contact within that block only. It then combines all separate pieces into a single contact. Below we show the extracted contact points that have clearly been offset by faults (also shown). Now, instead of creating a single surface across the whole model area, we use a special tool that creates the contact inside the fault blocks: 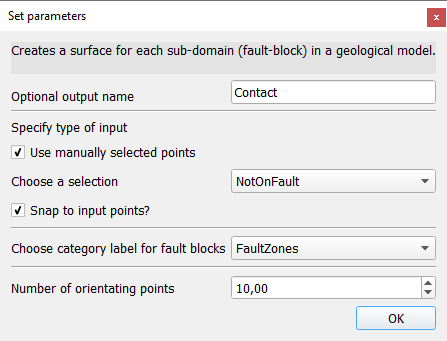 Note that we made a manual selection of points to filter points that are on the fault surface. This prevends unwanted offsets in the contact. Note also that we can specify which fault block model we want to use. This means we can have multiple interpretations and can select the one deemed most likely!

The resul is a single contact split at the fault surfaces: 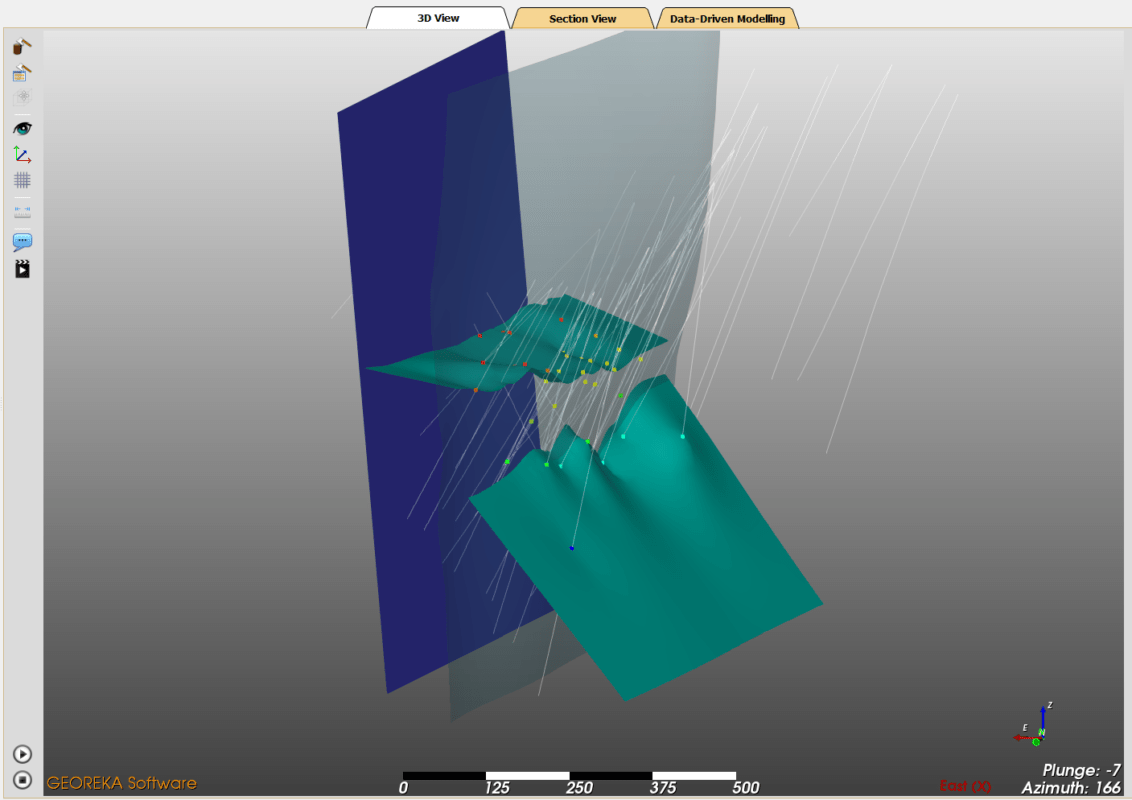 Notice how there is no contact (surface) on the left-hand side (Eastern part of the model). That is because the lithology extends all the way to surface there and has not been modelled in this example.

Now, the faulted contact can be used to build our geological model directly:

Note how the model is faulted at the fault surfaces. The contact is shown as a wireframe. The model was create from a final workflow like this: 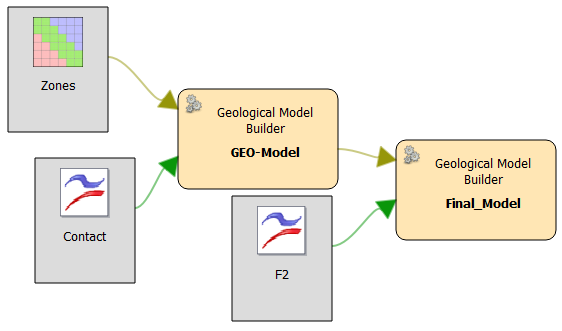 We used two modelling steps instead of one. This was needed since the contact was at surface (topography) and did not produce a triangulated surface in the eastern part of the model. Therefore we need to add the extra step to label the eastern zone as well (everything east of fault F2).

In this short article we demonstrated how some of the new tools in Version 3.1 can be efficiently used to created faulted models. GEOREKA’s flexible approach means complex fault zones can be defined and subsequently used to build complex faulted geological models. We proceeded through the workflow step by step, but could have combined all steps to create a single workflow: